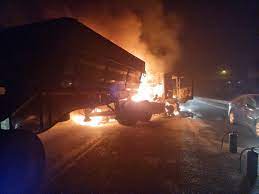 The Provincial Commissioner of the South African Police Service in Mpumalanga, Lieutenant General Semakaleng Manamela, has called on the public to respect the rule of law. This after five suspects were arrested for public violence and are due to appear before the Ermelo Magistrate’s Court today.  Reports state that the men were arrested after three trucks and a bakkie were set alight and two other trucks were damaged in Ermelo, recently.

Reports indicate that the incident erupted following a labour related dispute at a construction site at Merino Mall in Ermelo. A case of public violence was opened while no injuries were reported.

The said situation prompted the SAPS members and their counterparts from the South African National Defence Force (SANDF) to be on high alert where they heightened their visibility whilst monitoring the situation on the N2 in Ermelo, following the incident. These formations also worked around the clock to ensure that the suspects are brought to book. A breakthrough was then made when the five, aged between 30 and 58 were arrested by the police in Ermelo the following day.