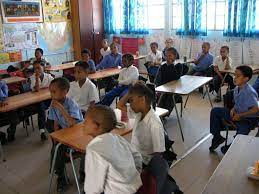 These mask break “entails going outdoors and removing their masks, and breathing for approximately 5-15 minutes,” read the MAC memo.

In April this year, a study from the BMC Institute for Infectious Diseases found that there are ‘significant concentrations of carbon dioxide’ in routinely used face masks. However, it must be stressed that these levels are acceptable for ‘short-term use’. The institute also concluded that ‘debate remains’ over just how high these CO2 numbers really are.

“Although a significant increase in CO2 concentrations are noted with routinely used face-masks, the levels still remain within acceptable limits for short-term use. Therefore, there should not be a concern in their regular day-to-day use for healthcare providers.”

The directive comes as South African schools opened and learners starting to attend classes on a full basis. Schools have been closed since June 28 following the introduction of stricter Level 4 Covid-19 restrictions to contain a surge in infections and since the start of the pandemic, learners have been attending school on a rotational basis.

“Where this is not possible, attendance on a rotational basis should continue presently acknowledging the relatively higher risk of Covid-transmission and illness in children aged 15 to 19 years.”

South Africa has the continent’s highest number of Covid-19 infections, with 2.46 million reported cases and over 72 000 deaths since March 2020.