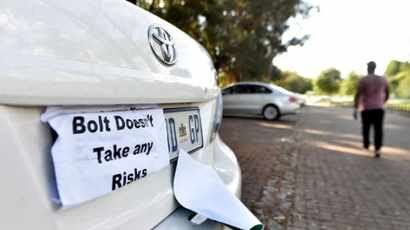 The South African Police Service (SAPS) in Mpumalanga says the hunt is still ongoing for people who shot dead an e-hailing cab driver in his vehicle after it had left Witbank.

The 27-year-old driver was killed on Friday. He was employed at a mine and had started doing extra work as a Bolt driver that week, using his brother’s vehicle.The SAPS believes the assailants requested the vehicle at around 8pm, and shot the driver in the car between Witbank and Vlaklaagte, Kwaggafontein.

“It is reported that on the said date, two security guards were on duty at Vlaklaagte Clinic when they responded to a car hooter of a white sedan at the gate with two occupants requesting emergency assistance. They (the vehicle occupants) alerted the security guards that there is a patient who needs assistance as they found him lying on the street with gunshot wounds,” said Brigadier Leonard Hlathi.

“The security guards opened the gate and one of them rushed inside the clinic to seek help from the nurses. While he was inside, the suspects dropped the patient on the ground and fled the scene,” said Hlathi.

The wounded man, identified by the SAPS as Vincent Nomokonde from Limpopo, was certified dead on the scene.

“A preliminary investigation revealed that the vehicle used by the suspects was belonging to the deceased, who was also working part time as a Bolt driver. The vehicle was later found in the bushes, abandoned,” said Hlathi.

“It seems as if the suspects tried to burn the car but could not succeed.”

The motive behind the murder is yet to be ascertained and the SAPS in Mpumalanga is appealing to community members with information that may lead to the arrest of the suspects to contact the investigating officer, Captain Thamsanqa Shabalala on 082 923 0081, or call the Crime Stop number at 08600 10111.Alternatively, members of the public can send information via the MySAPSApp

“All received information will be treated as confidential and callers may opt to remain anonymous,” said Hlathi.

In May, a timely intervention by an off-duty Johannesburg Metro Police Department (JMPD) officer saved a Bolt driver who had been hijacked and bundled into the boot of his car, while it was being stripped in Mid-Ennerdale south of Johannesburg, according to JMPD spokesperson Xolani Fihla.

In April, the Durban e-Hailing Association raised concerns about the safety of e-hailing drivers in the city and nearby townships. This came after a 30-year-old Bolt driver was found dead after he went missing. The association said it had also received reports of drivers being robbed or assaulted.

In 2018, Taxify (now Bolt) driver Siyabonga Ngcobo, 21, was bundled into his car before it was torched. The final-year sports management student at the Tshwane University of Technology had allegedly been kidnapped and locked inside the boot of his Taxify car before it was set alight. He died in the fire.

Despite the highly publicised attacks and some murders of e-hailing cab drivers in different parts of South Africa in the past, the operators continue to work in fear, blaming authorities and the e-hailing services for not doing enough to protect them.